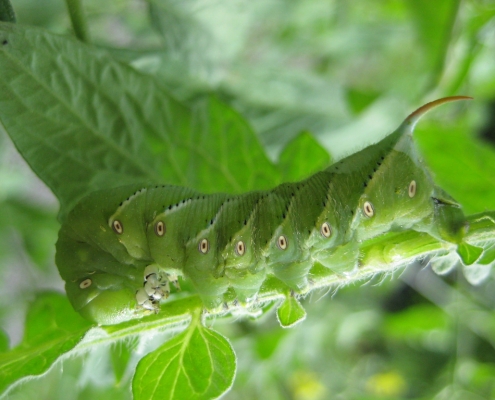 Becker Microbial Products, Inc., (BMP) began to invest in biotechnology in 1985. This investment was structured around the acquisition of proprietary BT technology through several venture capital agreements with research departments at Tel Aviv and Hebrew Universities in Israel.

BMP also financed the construction of a 20,000 liter fermentation pilot plant in Israel. This plant was instrumental in the development of fermentation and formulation technology that is state of the art and is as good as or better than that being employed by the leading manufacturers of BT in the United States.

The strain of kurstaki used in the BMP 123 products is effective against more than 100 species of Lepidoptera. It has the same spectrum of activity and efficacy as the currently available commercial formulations of Thuricide, Javelin, Dipel, Foray, Agree, Design, and Biobit.

However, the BMP 123 kurstaki isolate is a unique strain that has excellent formulation and fermentation characteristics. It was unique enough to be considered a new active by the EPA. This is significant because the largest competitors of BMP use the HD-1 strain which was first commercialized in 1971.

The fermentation process produces technical product of a higher potency per unit volume of fermentation beer than typical for HD-1. The technical liquid slurry and powder can be used to produce a wide variety of high potency aqueous and non-aqueous liquids, wettable powders, water dispersible granules, and granules using corn grits, corn cobs, clay or baits as carriers.

The BMP products based on strain Bacillus thuringiensis subspecies israelensis strain BMP 144 are:

The BMP 144 strain was isolated in the Negev Desert in Israel and is active against mosquitoes and blackflies.

Becker continues to monitor current research with B. thuringiensis isolates to keep its products current and competitive against all major insect complexes.

The company is privately owned. Its business strategy has been to concentrate on what it does well and to service highly profitable niche markets with excellent products of high quality and efficacy. Becker has set up distribution into the international market place. It has strategic alliances with major distributors in Spain, Australia, France, Italy, Turkey, India, South Africa, Colombia, Venezuela, Brazil, Argentina, and Central and South America.

Becker Microbial Products, Inc. is managed by Dr. Terry L. Couch. He has more than 40 years experience in the development of microbial pesticides for the agricultural and public health markets.